Year after year I am faced with the challenge (well actually 4 times a year) of what will I make for my kids (and wife’s) birthday.

While the kids are younger the themes are usually pretty simple and straight forward, the challenge comes when you need to figure out how crazy I will go with the cake;

How big?
How small?
Will it fit into my schedule?
Do I get input from my 3 year old? … what if he just wants something boring!

There are so many things that need to be considered and factored into making their cakes.

This year our youngest turned 3, he chose the same theme as last year (and I foresee this being the theme for many more years) Thomas the Train.
To say he is obsessed would be an understatement, the amount of trains he has is insane (You know that nightmare parents have of walking on Lego pieces all over the floor. Well that’s the nightmare we face at the end of each day in his room but with trains!)

He is incredibly knowledgeable of each trains name, number, color, face… it’s truly remarkable. So only fitting that it would once again be the party theme, and HEY we already own CRAZY amounts of trains and paraphernalia for the party, Win win really!

Last years cake was pretty epic, although not exactly what I set out to do given a malfunction with a fog machine in the middle of the night (right before his party) it was still quite the feat and he LOVED it and STILL talks about it… although that may be because there is still a piece of it (styrofoam) in my studio.

He does still ask where Thomas and Percy are and over and over I have to explain that we ate them at his party!

Which brings me back to my point, this year and what I was going to do for this years cake.
Being the cake artist I can’t simply do a slab cake or even just a basic 3D train as I have done those in the past, my kids need something a little more special.

When I mentioned to him that I would make him a Sir Topham Hatt cake, he wasn’t completely on board but was willing to indulge me (OK, he’s 3 maybe not indulging me, but rather me just doing what I wanted anyway)

As I was making the cake and he saw the progression of it he began to get more and more excited.
If you check out the replay of this LIVE Facebook recording you will see he became quite the chatty little fella… and yes in true boy form started talking about butts and farts…

From this video you can see the carving and shaping of the cake from beginning to end.
The armature what created ahead of time however the cakes were stacked, carved and ganached along with his arms and legs on film.

Should you have questions about that process please feel free to drop a comment on the video itself as I do check back and will be sure to answer as soon as I can.

In this video we shape and model his face and head.
This is probably one of the most difficult parts of making a cake of such an iconic character. People will recognize if he does or does not look like him.

No pressure really and I only gave myself about 24 hours to complete this cake from beginning to end.

Once the body was covered and it was time to place the head, it was a little to small, so in order to avoid remaking the entire face and head I split the back and added a piece in, extending its size. This is the benefit to using modelling chocolate as you can blend seems so easily.

Here are he is completed. I don’t have any progress shots of in between the video above and the completed cake as time didn’t allow for that.

Side view of his face

Close up of feet and “Gravel board”

Stay sweet and get creative 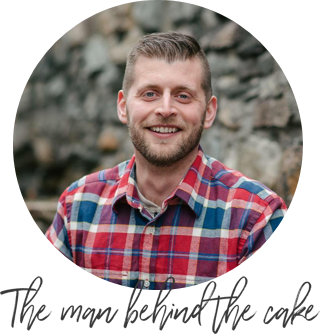 WELCOME, I'M AARON! I am a self-taught Red Seal baker and specialty cake decorator and College Baking and Pastry Arts Instructor. I am located in Conception Bay South, Newfoundland, an island as far east in Canada as you can go! I am married to an amazingly supportive wife and we have 3 very energetic boys! READ MORE

What are you looking for?